The Rush of Hitting the Bull’s-Eye 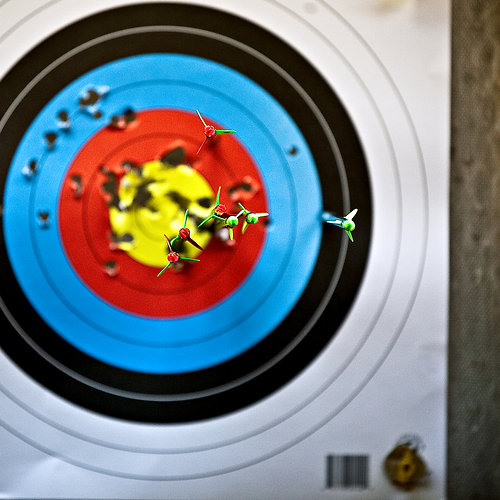 The colors of a feather can mark who fired the arrow. Credit: Emily Anne Epstein for The New York Times

BEGINNERS on an archery range are almost as easy to spot as the targets: just look for a mean black-and-blue patch where a bowstring has sliced against an incorrectly positioned bicep. Few injuries inspire such rapid correction of form.

There are many novice archers at Pro Line, an indoor range and supply store on a commercial stretch in Ozone Park, Queens. Reasonable fees — $13 buys an adult day pass — have long drawn would-be Robin Hoods to the lanes on the third floor of this squat, lemon-hued building. And archery has received a boost this year from “The Hunger Games” and its bow-slinging heroine, to say nothing of the marksmanship in “The Avengers” and the coming Pixar vehicle “Brave.”

Olympic-style recurve bows, modern crossbows and intricately carved wooden hunting bows dangle from the ceiling. But otherwise the range is an ascetic backdrop for archery’s bare necessities: a weapon, pencil-thin arrows pulled from a pouch on the hip and a gloriously fresh target waiting 5, 10 or the regulation 20 yards away. The sports drink here is drip coffee, 75 cents a cup by way of an honor system.

The sport allows little room for error: exhale a millisecond too soon and a minuscule shift, amplified over 60 feet, can doom an arrow that might have otherwise landed squarely on target.

“It’s mechanical,” explained Kevin Chu, 25, an unemployed writer from Queens who started popping by a month ago. “You just have to shoot the same way every time.”

Pro Line is also a place for serious athletes to train. Joe McGlyn, one of the owners, recently placed 15th in the Olympic trials in men’s archery, falling short of a spot on the team. Guy Gerig, another partner, is a former member of the United States national team. And Neil Kucich and Steve Miss, rounding out the mix, are dedicated amateurs who have been shooting for decades. The owners all have day jobs, so they work as a tag team to keep the range open for weeknight target and hunting leagues and on weekends for general recreation and occasional youth tournaments.

On a recent Saturday, the youngest archer was Ezra Hancock, 8. The oldest was Ed Gerig, 78, father to Mr. Gerig and grandfather to Valerie, 17, who started shooting when she was 4 and works part time at Pro Line.

“Age is not an issue,” said Jacquelyne Coleman, 44, a Manhattan-based physical therapist who has brought her nephew, Chris Coleman, 14, and his trademark pink arrows to the range since he was a toddler.

If the archers had one thing in common, it was a desire to improve. For Steve Liu, 18, a senior at the Bronx High School of Science, the sport’s appeal was “the pure satisfaction of seeing results,” he said. “When you run, it takes months to get faster.”

For others, the rewards extend beyond athletics. Jack Lipton, 56, and his daughter, Sara, 11 — who were training with matching patches over their left eyes — came to Pro Line after she started shooting suction cups in her bedroom. Off the range, Sara, an aspiring actress, is accustomed to auditioning for elusive parts. “In archery, there is no rejection,” she said.

Someday, knowing her way around a bow might even prove to be an asset: Mr. Gerig trained Zoe Saldana for her role in “Avatar,” while Mr. McGlyn has completed training Robert De Niro for a role in “Killing Season,” scheduled for release next year.

And for those who set their sights beyond shooting for appearance’s sake, Mr. Gerig offered sage advice for the spiritual journey: “You decide how good you want to be, and we’ll get you there.”